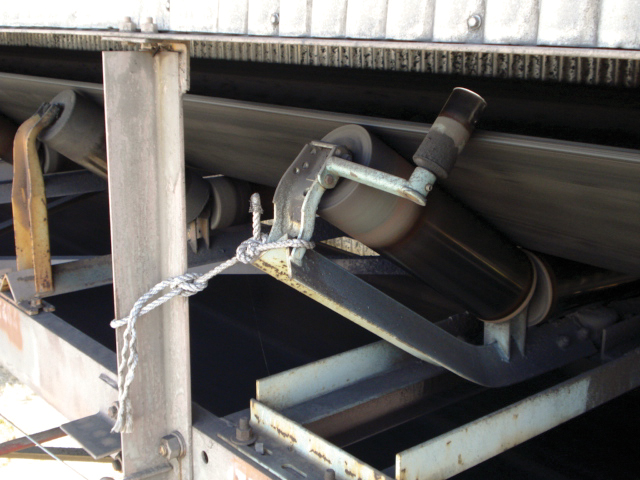 Knock Knock. Who's There? Idlers!

I have been around conveyors for 20 years and have seen thousands of belts. I have just about seen it all when it comes to material handling. Do you know what I have not seen? I've never seen a belt run true “right out of the box.” All conveyors, no matter how well designed and built, have some wander. Sometimes it is a little mistracking while other times it is so far off-track, you wonder if the belt and the idlers even belong /work together.

There are many consequences of a mistracking belt. The first and foremost is spillage. 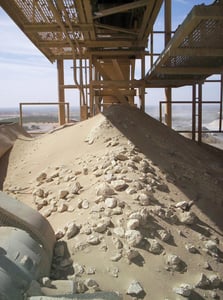 A belt cannot catch material if the belt is not present in its entirety.

Spillage can lead to all kinds of safety issues, component damage, and a generally untidy facility. A mistracked belt can also cause damage to the equipment and/or the belt itself.

No two belts are identical. A belt can be manufactured incorrectly, it can be loaded off center, the stringer may be out of line, or a strong wind may push the belt out of line once or twice a day.

There are many reasons that a belt could be out of line, and specific operators know how to fix their own belts. If you don’t know what is causing your belt to mistrack, please give us a call. A seasoned professional can quickly diagnose the problem and offer a solution.

How To (Somewhat) Fix It

As long as conveyors have been around, people have tried many methods to keep them in line. 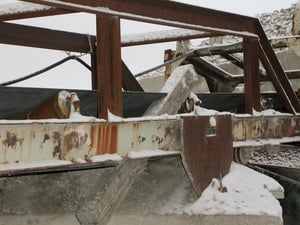 Many operators have elected to place an obstacle in the belt path to not allow the belt to travel too far out of line. This method of “steering” has been met with varying degrees of success. Sometimes it works but most of the time, the belt eats through the obstacle (as shown to the right).

Conveyor owners quickly realize that pivoting an idler is the quickest and most effective way to steer a belt. 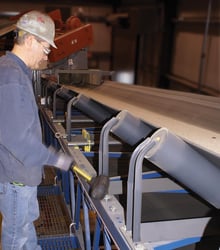 The most common “solution” is called “knocking an idler.” This is the process by which an idler is manually moved slightly to “steer” the belt back into line.

Many manufacturers have also created mechanisms to help align a belt. Each solution works in specific applications.

While these mechanisms do function in specific circumstances, they do not react to dynamic belt wander, meaning they do not handle intermittent belt wander.

To combat dynamic belt wander, the tracking idler was created. This idler senses the belt movement and turns the idler to steer it back into position. If the belt runs true, the idler will not pivot as much. 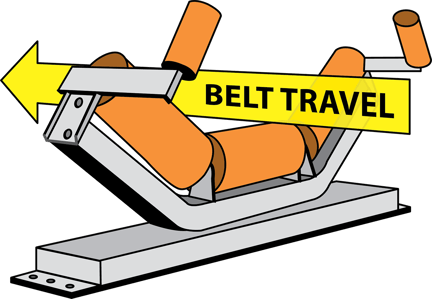 There is also an issue of slow reaction time. For the sake of space, tracking idlers have short sensing arms. Unfortunately, this necessitates a very large belt displacement to create a small idler pivot.

While a tracking idler tends to work, on a particularly stubborn belt, no amount of idler pivoting will steer a belt. Short sensing arms can actually pinch a belt if the idler pivots too far.

In an effort to resolve this, some owners have elected to “tie off” a tracking idler (shown below). 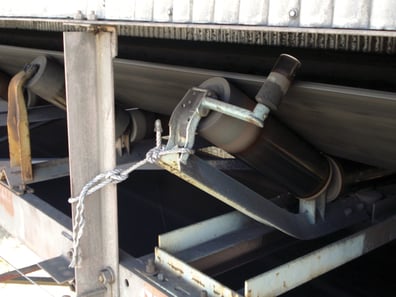 This is a lower-labor version of knocking. While this protects the belt, it doesn’t address the extreme mistracking. Check out this

to prevent the need for tying off.

Wouldn't It Be Nice To Have The Best Of All 3 Worlds?

There happens to be one belt tracker that utilizes the best technology to keep a belt running straight. A “multi-pivot-point” tracker, shown

,  utilizes pivoting idlers, sensors, and geometry. The sensors cannot pinch the belt and the geometry amplifies the misalignment to create a greater pivot.

I hope you have learned more about keeping your belts aligned!